In Chinese folklore, a story is told about Zhang Seng-Zuong (circa 490–540), the legendary painter. In the story he is said to have painted a mural of four dragons on a wall of the temple of Andong. It was a beautiful painting, the dragons soaring high in the clouds, but the image was incomplete. Zhang had not painted in the pupils of the dragons’ eyes.

When asked why this was so, the painter answered, “Well, they will fly away if the pupils are put in.”  No one believed him, of course, and people argued he should finish the work of art. Zhang resisted, but the people would not change their minds. Finally, he did as they asked. The dragons came to life, and flew away in a flash of lightning and rumble of thunder. 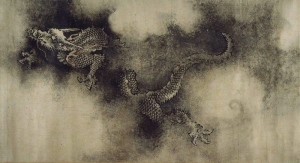 Today the final touch of a dragon painting is called dotting the eyes, and is said to be the act that brings the art to life. The last dot is applied with a red paint made from cinnabar, a mineral of particular significance in ancient Chinese pharmacology, an element that holds the power of life and rebirth.

You’re standing there, looking at your painting, knowing it’s almost there… almost alive. People have told you it’s beautiful and you agree, but you feel it’s not quite finished.

Reach back and pick up the small clay jar, the one that holds the paint made from cinnabar. Remove the stopper and pick up the fine-tipped brush. Dip it into the pigment and dot the eyes.

Bring the dragon to life.

21 thoughts on “Waking the Dragon”